After spending three nights at the ever-so-lovely Disneyland Hotel, it was time to say goodbye.

*Spoiler alert: the following coffee was one of the only things that got us through the day! Ah, Cafe Fantasia, and it’s magical cappuccinos. Why yes, that is cocoa powder in the shape of Tinkerbell. Pure genius, I tell ya.

“Nothing in France is easy.”

That became our sort of proverbial motto during our stay. It was always little things: not being able to get the rental bikes out of their little stalls cause the instructions were in French, being unable to comprehend the train schedule, always failing at flagging down our waiters for the check, etc.

And on this day, it was returning the rental car. 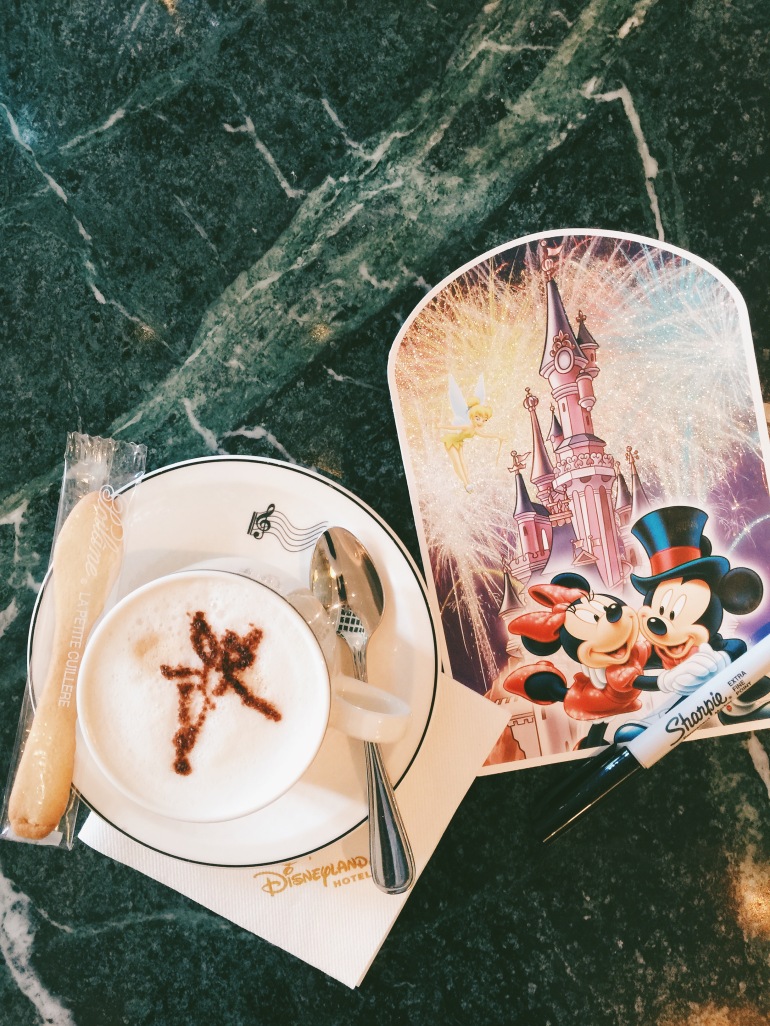 I think we made about 3 aimless loops through the Disneyland Paris property, gridlocked behind insane traffic, searching for the rental drop. The address in the Enterprise booklet was useless, Google Maps was useless, asking for help was useless, we were useless. Eventually we just gave up, dropped the car off where we got it, and hoped the Enterprise people wouldn’t care. (They didn’t.)

Our flight out of CDG left midday. We decided to Uber it there a little earlier than necessary, just incase we ran into trouble checking in/checking our bags/etc.

Good thing we did, cause NOTHING IN FRANCE IS EASY. First, we had to check in our own bags at a kiosk with very non-specific instructions in very vague English. Fun. Then, when we were going through security we got pulled aside because our carry-on items exceeded the maximum weight limit, which was apparently 12 kilos. Awesome. So, then we had to leave the security line and check our carry-on luggage, which was some ridiculous fee that I think was more than the cost of the flight itself? REAL GREAT.

Mark was silently hyperventilating at this point, so we decided to pay for one-day Air France Lounge access so he could decompress with all-you-can-drink red wine. It helped, trust me. Plus they had wifi, so I could write this.

With bellies full of cheese and wine, the flight to Bordeaux was a breeze. Apart from the fact that the flight attendants kept spazzing out over Lilo 2.0, thinking she was real and wanting to play with her. The protective fur mama in me wanted to be like, NO TOUCHING. Buuut, I kept having to remind myself that SHE IS FAKE.

After landing and waiting for our checked luggage (which survived, hallelujah), we got our rental car, and Waze’d our way to the Grand Hotel de Bordeaux.

But, “Nothing in France is easy.”

The hotel was in the city center of medieval Bordeaux, apparently smack dab in the middle of a ton of walk streets that we couldn’t access by car.

The streets were tiny, narrow, and massively confusing, so as we tried to find alternative routes we ended up accidentally driving into an underground pay parking lot that winded us down literally hundreds of feet before we could reverse and come back up.

I called the concierge for the hotel after we made it back out into the daylight. He was sweet, but very French and couldn’t really understand us. Though he tried his darndest! He thought we were on the opposite side of the river, so his directions were kind of moot and ended up being more of a stressor than a relief.

Especially cause our CAR DECIDED TO STOP WORKING ON THE TRAIN TRACKS WHILE A TRAIN WAS COMING. Yes, this is not the plot of some cheesy Looney Tunes skit. This actually happened. Our crappy rental car’s stick shift transmission decided to get stuck in 3rd when we were trying to reverse off of active train tracks.

So, imagine this scenario: Mark’s freaking out, trying to make a tiny U-turn off some train tracks. The rental car is useless, stuck in 3rd gear, and a real-life train is barreling towards us. Meanwhile I’m screaming at him to “REVERSE, WHAT ARE YOU DOING, REEEVERRRRRRSE.” And the French concierge is ignoring all of this and repeatedly telling us that we must “go over the bridge, go over the bridge” on speaker phone. 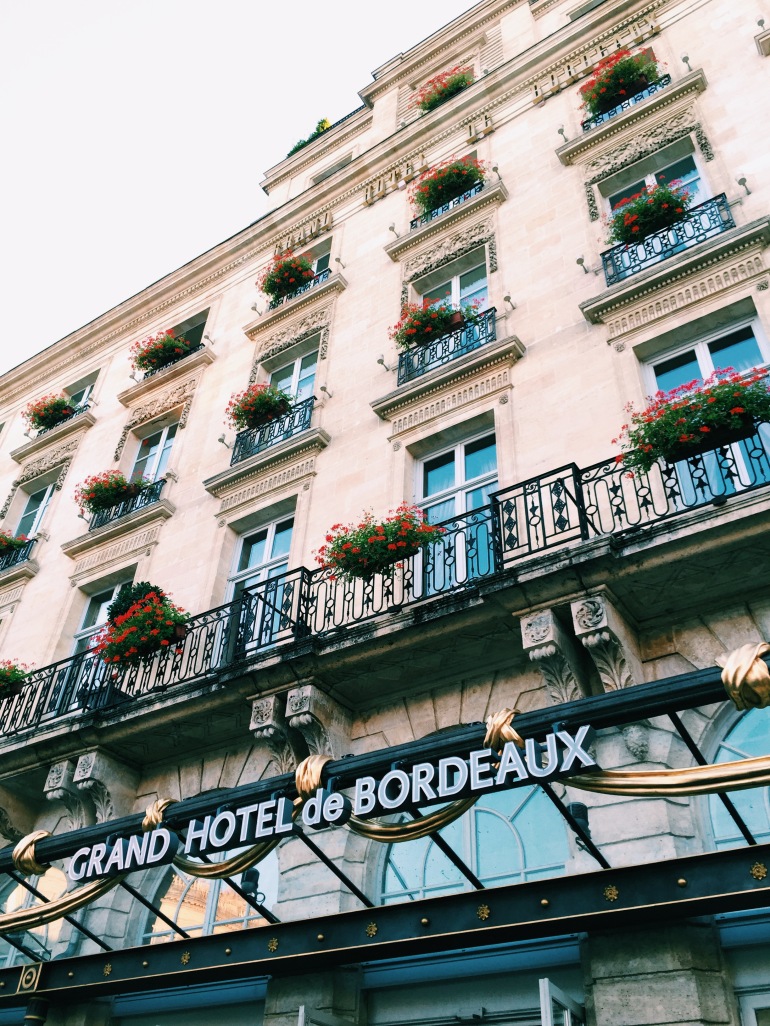 Somehow we survived and made it to the hotel. Mark was in need of a whole bottle of Xanax afterwards but WE. SURVIVED. 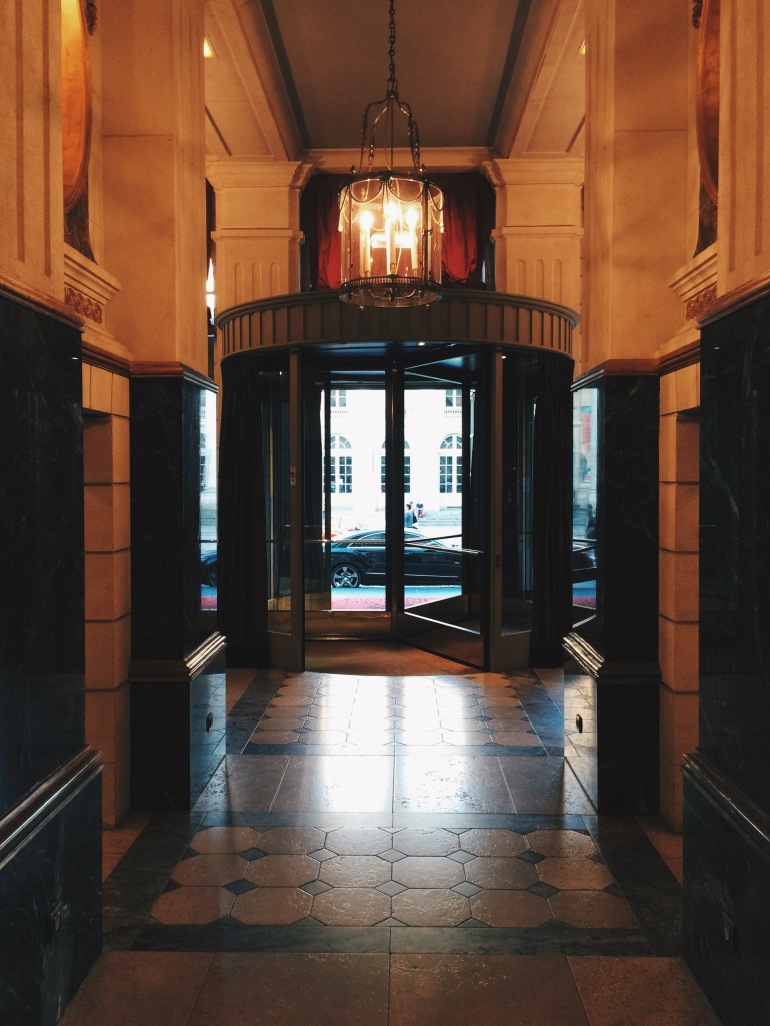 The room was very dark, moody, and majestic. (Our current feels, save for maybe that last one.)

Of course I livened it up by putting Lilo 2.0 in the corner. See, look how festive now.

The rest of the evening was mellow. We did a bit of wandering to unwind, and got a tiny peek into the beauty of Bordeaux.

This is le Grand Théâtre de Bordeaux, which is directly across from our hotel.

Not shown: our cheap, broken-down rental car just out of frame, parked right next to the Audi. It was pretty comical. 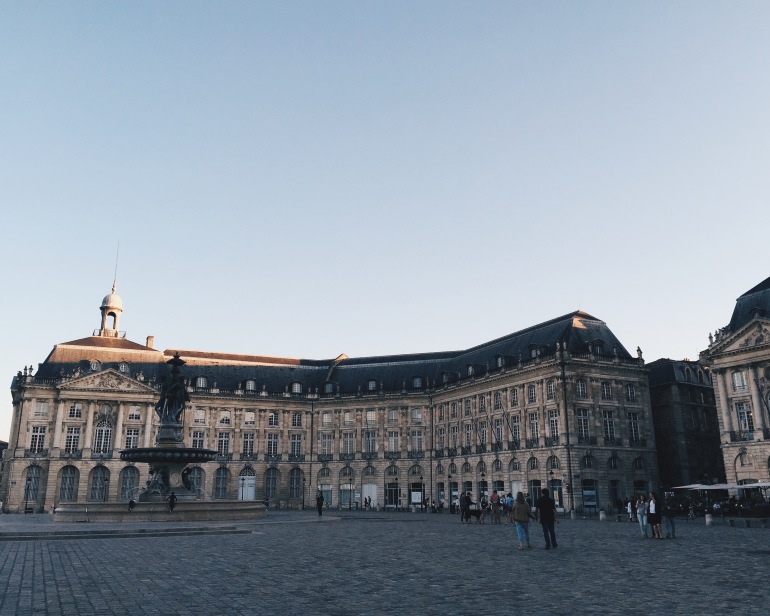 Ok, Bordeaux. You’re worth the hassle.

For dinner we kept it simple and stayed very central; this cute cafe was right outside our hotel. And they even offered blankets for everyone eating on the patio.

We did wine to unwind. Bread to get chub. We split the beef tartare and French fries as an appetizer, cause duh. And then I got my go-to of lamp chops. 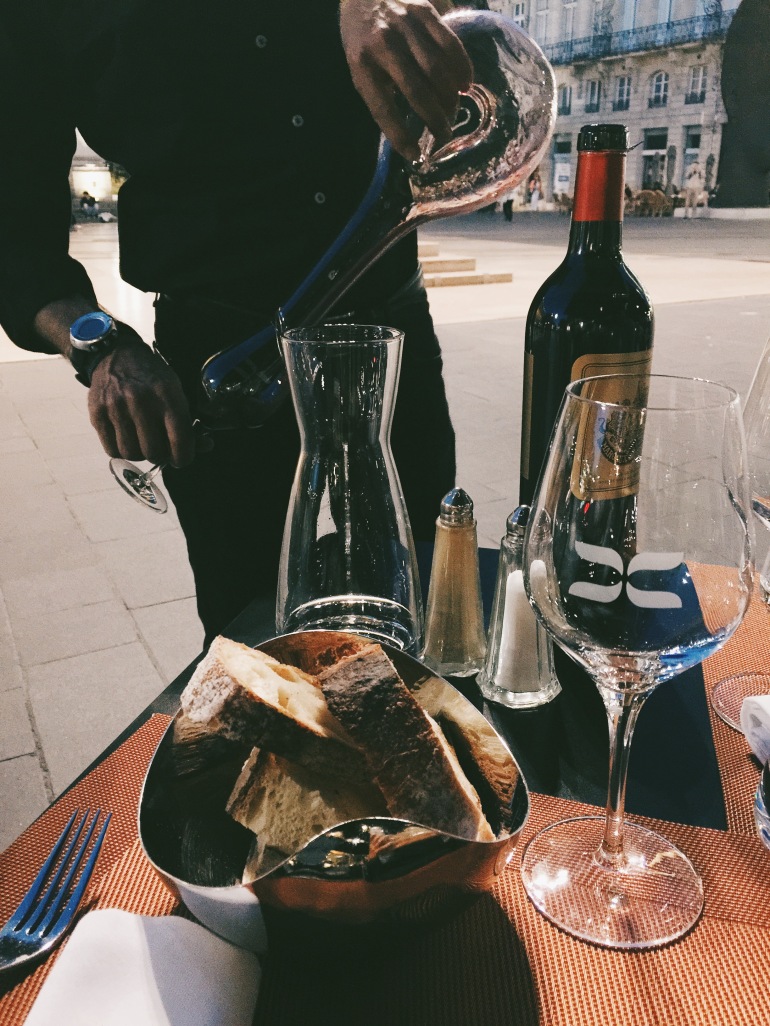 Best part: It was dinner AND a show. We got to watch them haul away our rental car mid-way through dessert.