First off, Happy New Year! I spent the last of 2016 at Disneyland, ringing in the new year with Mickey and friends. Then I spent the first 3 days of 2017 speedwriting a 20 page paper. Let’s hear it for the joys of grad school.

Anyway, now that’s done I can get back to the good stuff: reliving my time at Tokyo Disney! We’re coming up on almost 2 months since the trip, and I’m nowhere close to being done recapping all the amazing stuff we got to experience. 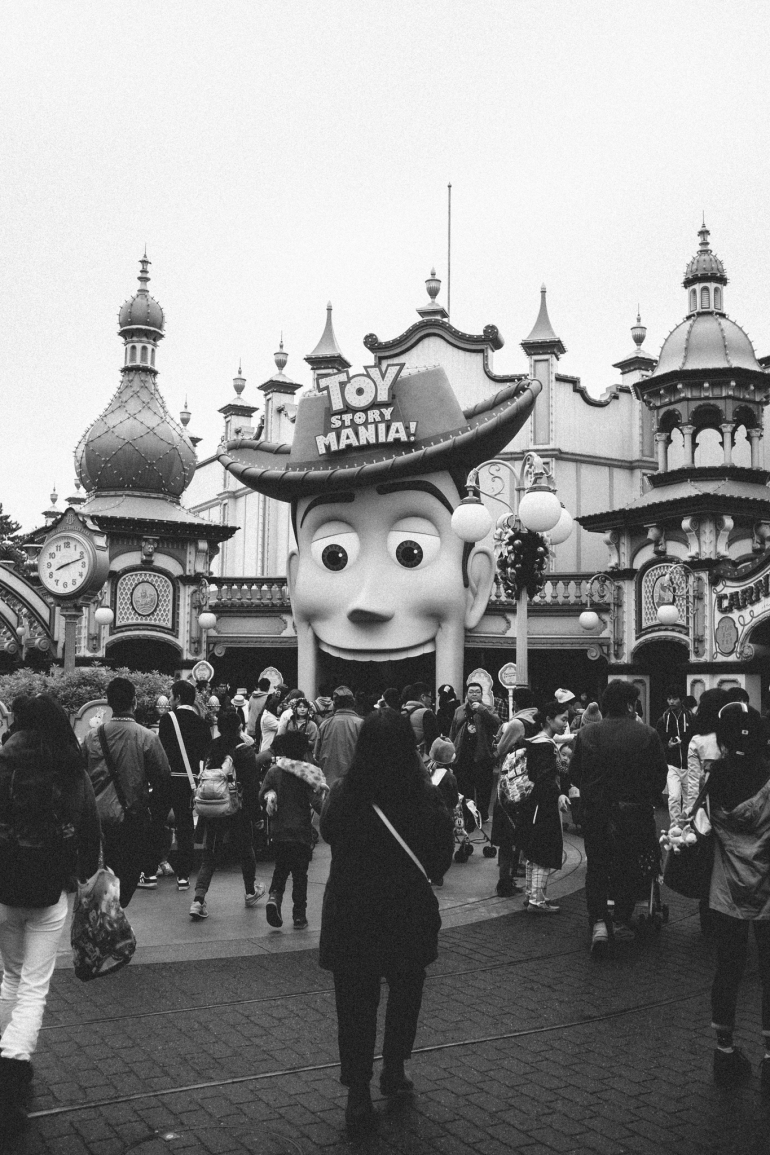 We spent our third day at the resort in DisneySea, which was fast topping my list of favorite places to be, ever. After breakfast again at the Dreamer’s Lounge in the Tokyo Disneyland Hotel, we took the monorail (look how roomy! look how spacious!) two stops to DisneySea.

The previous morning, we’d used our “Happy 15” early entry to grab Fastpasses for Journey to the Center of the Earth. The Jules Verne-based attraction was easily my favorite in the entire resort, and I could’ve ridden it at least another 489374 and been a happy camper.

But on our third day at the Tokyo Disney Resort (and second inside DisneySea) we had other plans… Toy Story Mania! 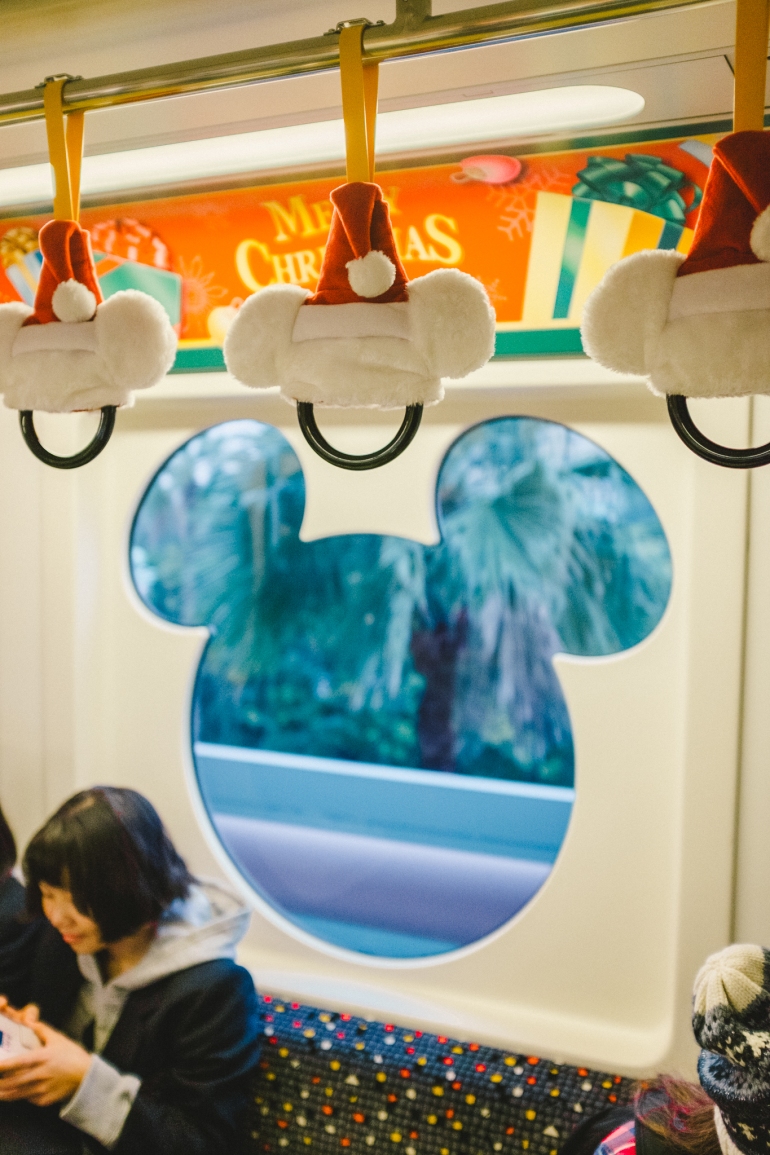 The Japanese obsession for Toy Story Mania (and Toy Story in general) is off the charts. I guess it makes sense; Toy Story Mania fits all the necessary conditions for a Japanese love affair: it’s got the arcade game factor, the whole cowboy Western thing, and above all else — it’s kawaii as all hell.

Every morning, as the park opens, there’s a mad rush of people who head straight for it. The stand-by line quickly racks up to over one or two hours, and the line for Fastpasses becomes its own special beast.

We have Toy Story Mania in Anaheim, and apart from the differences in the queue, it’s basically an exact replica. I knew I wanted to see the Woody-eating-you-alive quirky queue entrance, but it wasn’t on the top of my “must ride” list. But, like with Duffy and Shellie May, the Japanese love for Toy Story was crazy infectious, and I decided that we couldn’t NOT ride it!

The line looks insane here, but it moved quickly. Since we got to use the “Happy 15” early entry, we were one of the first ones in line and it only took about 5 minutes to walk the queue and get on. 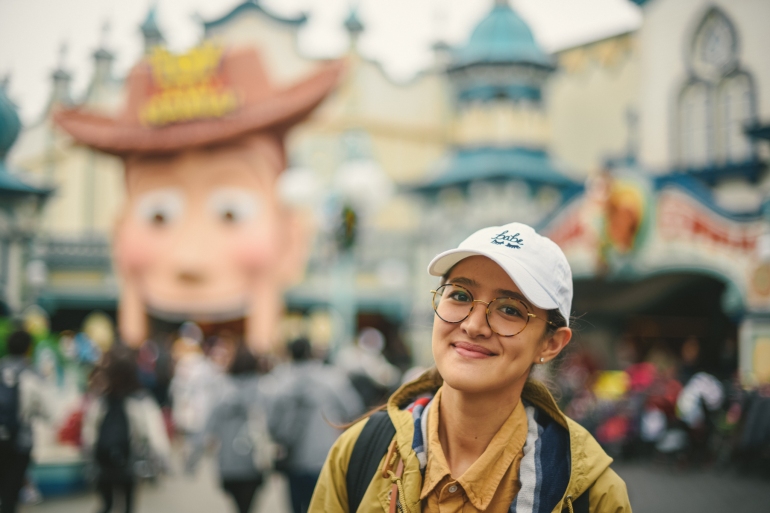 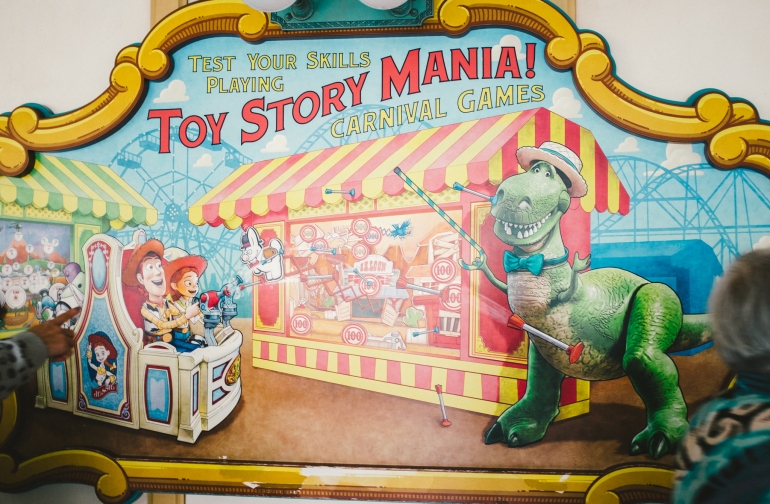 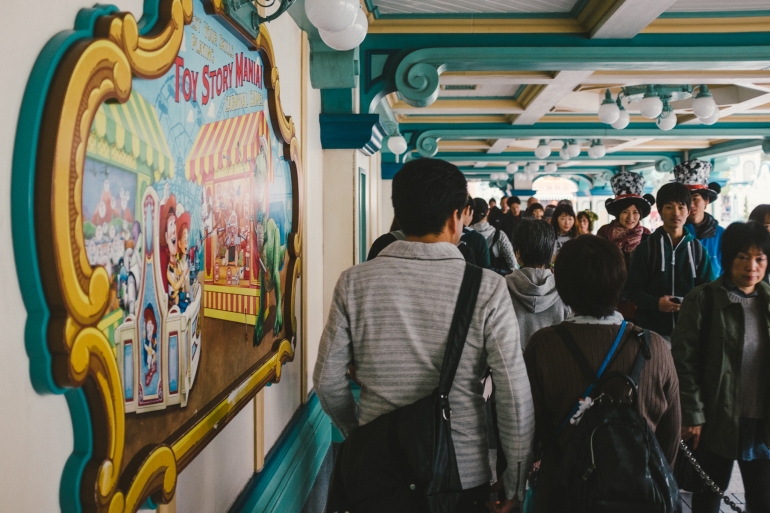 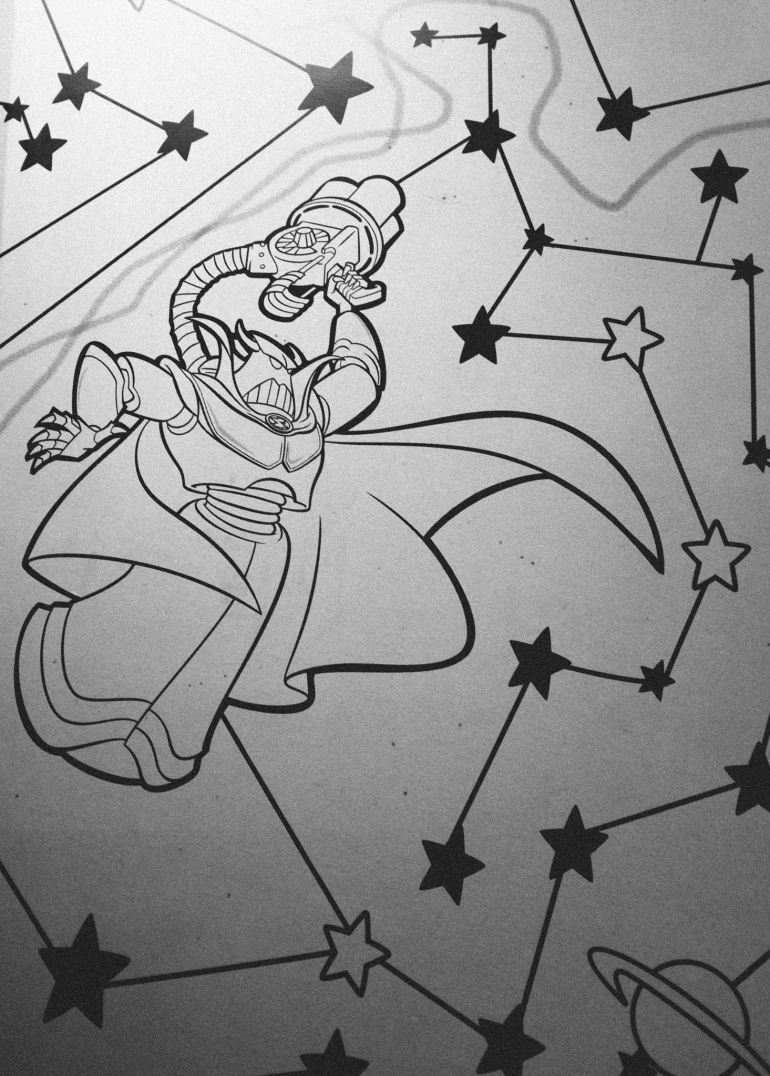 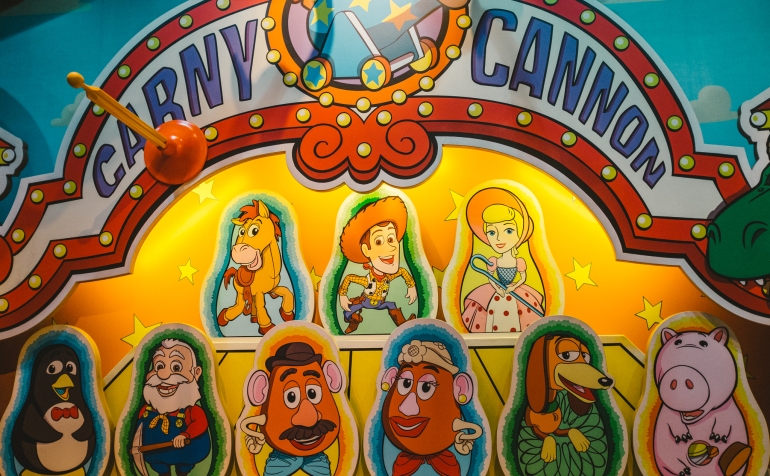 Can we pause for a second and acknowledge the fact that this teenage boy was carrying around a giant Gelatoni stuffed animal!? You’d never see something like this in Anaheim or Orlando, but it was totally commonplace in Japan. Cutest thing ever. 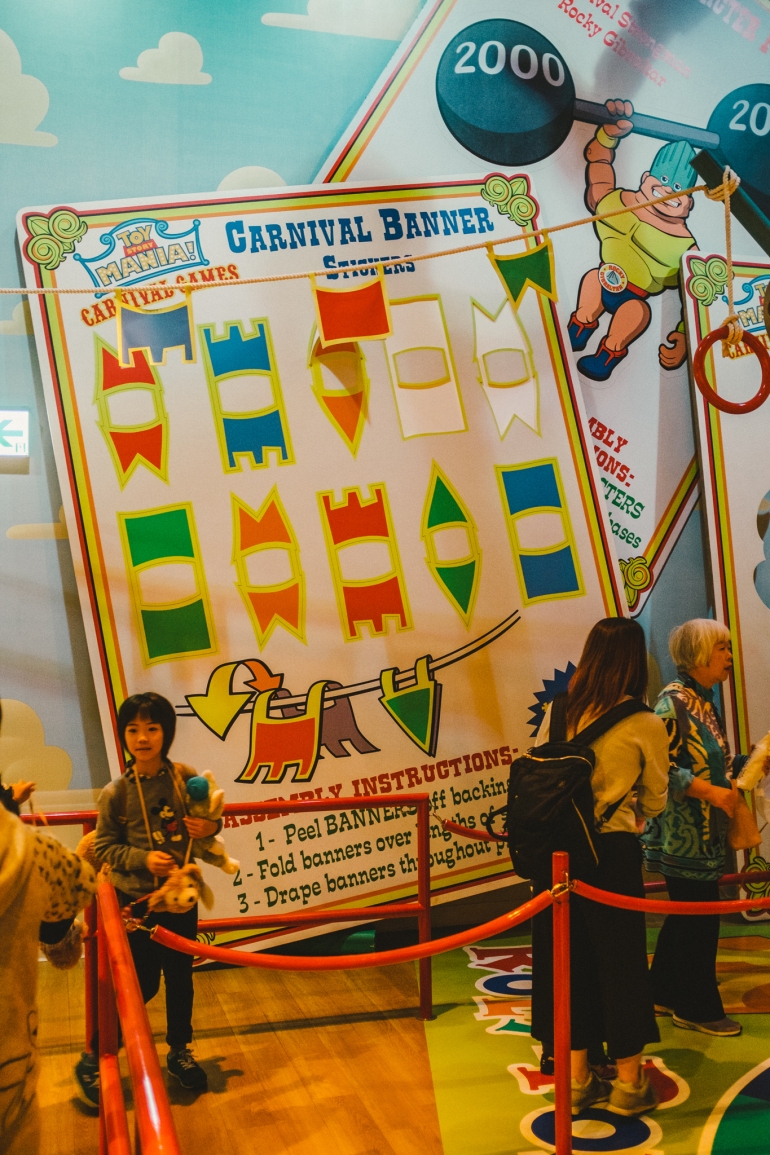 The queue itself reminded me a lot of the Toy Story Mania at Disney’s Hollywood Studios in Orlando. Much more intricate than the queue at Disney California Adventure in Anaheim, where space is obviously at a premium. It was almost a bummer the line was moving so quickly, cause I just wanted to take in all the details. 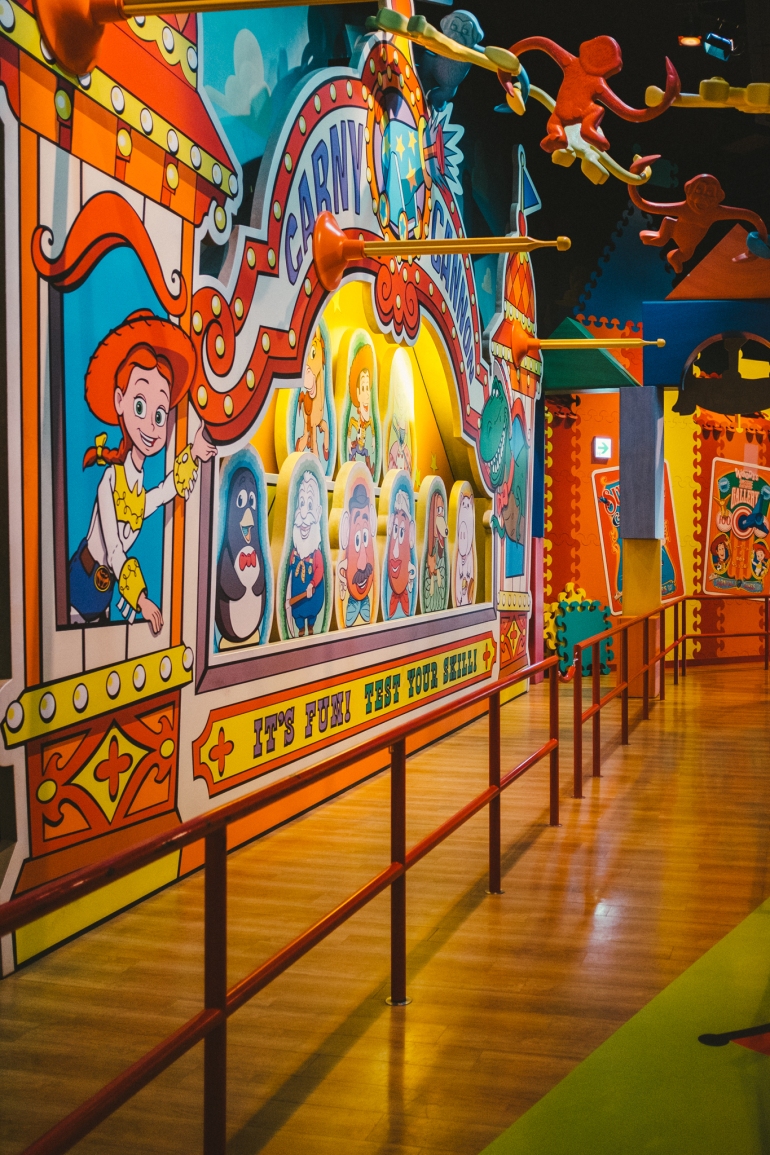 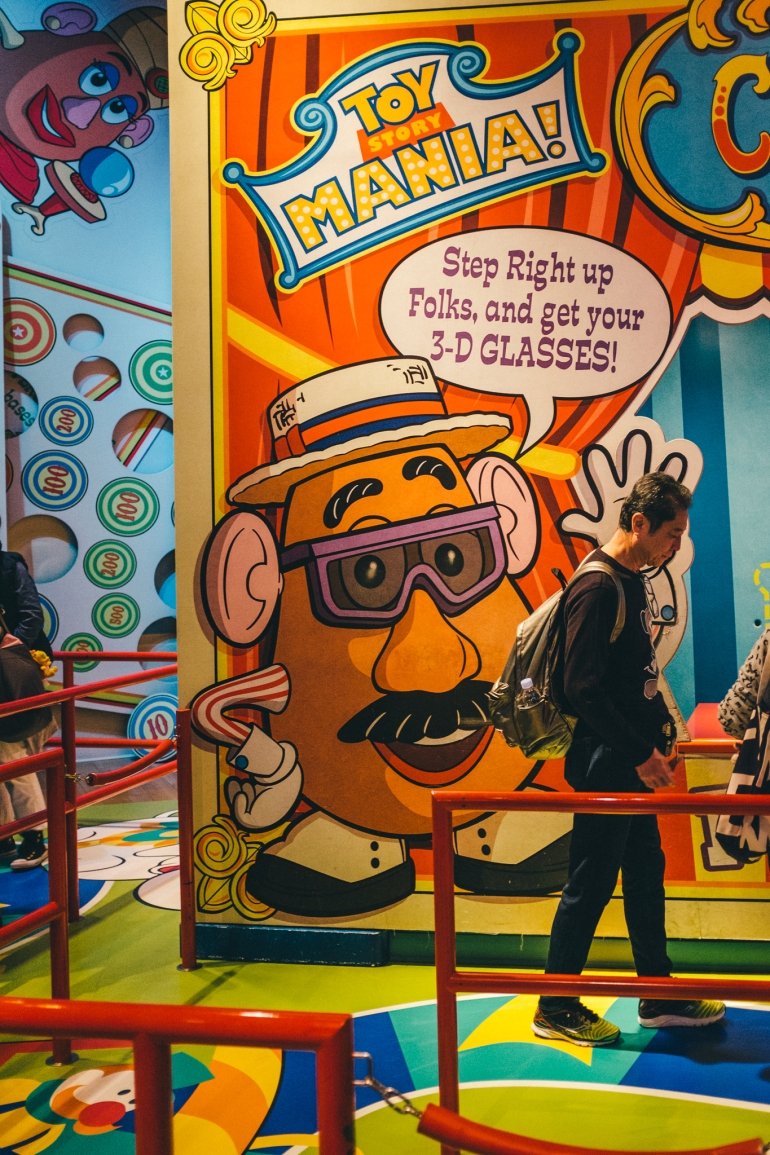 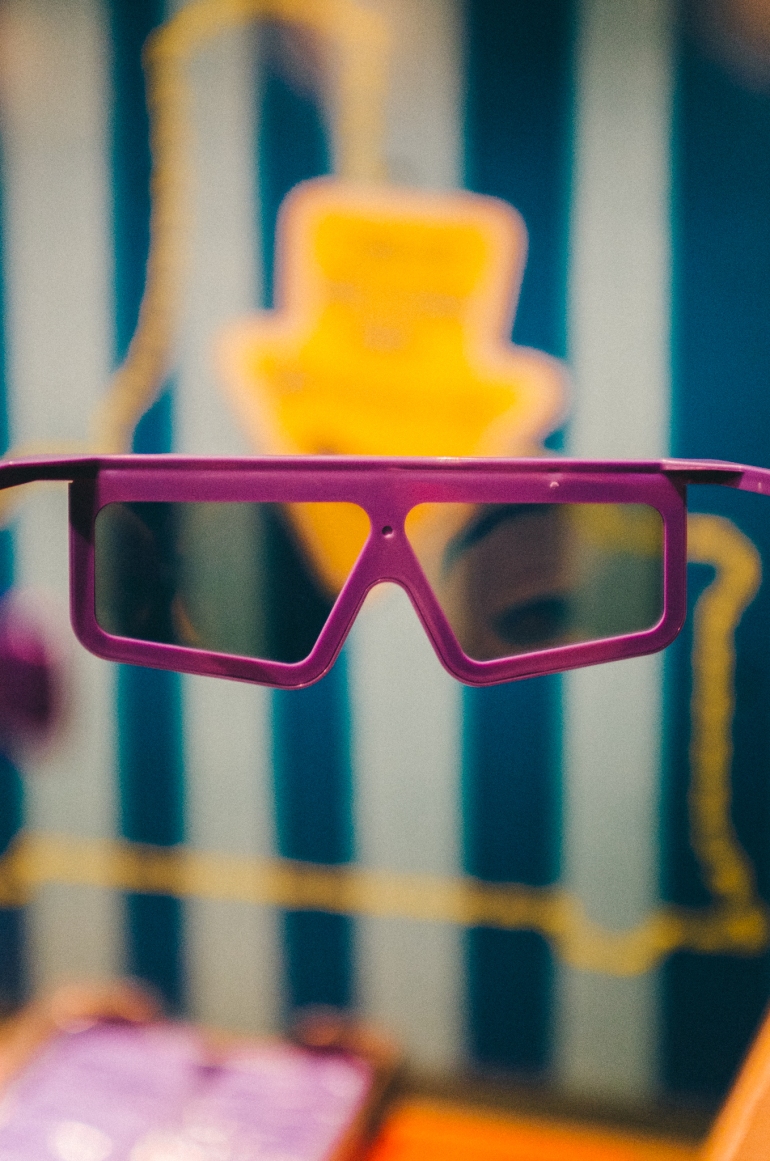 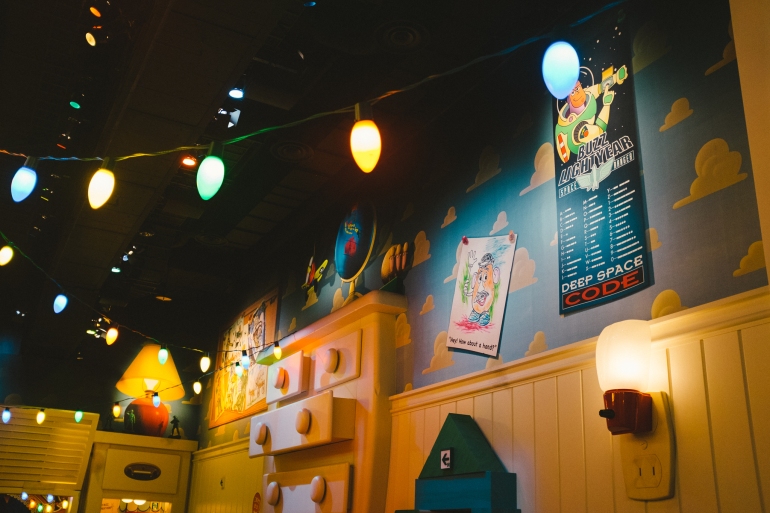 The ride itself was exactly what I was expecting: just about the same as all the other Toy Story Manias. I had a hoot — I’m pretty competitive, and also pretty dang good at the game, so I had a grand ‘old time kicking Mark’s booty. 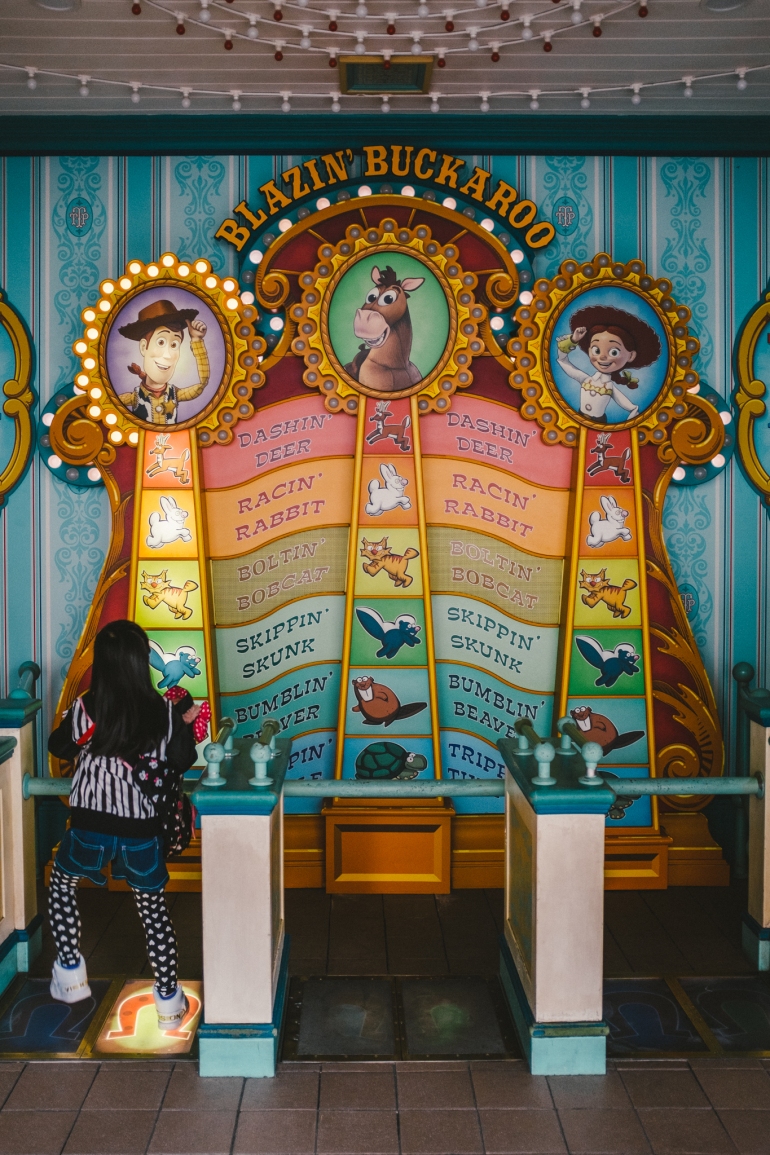 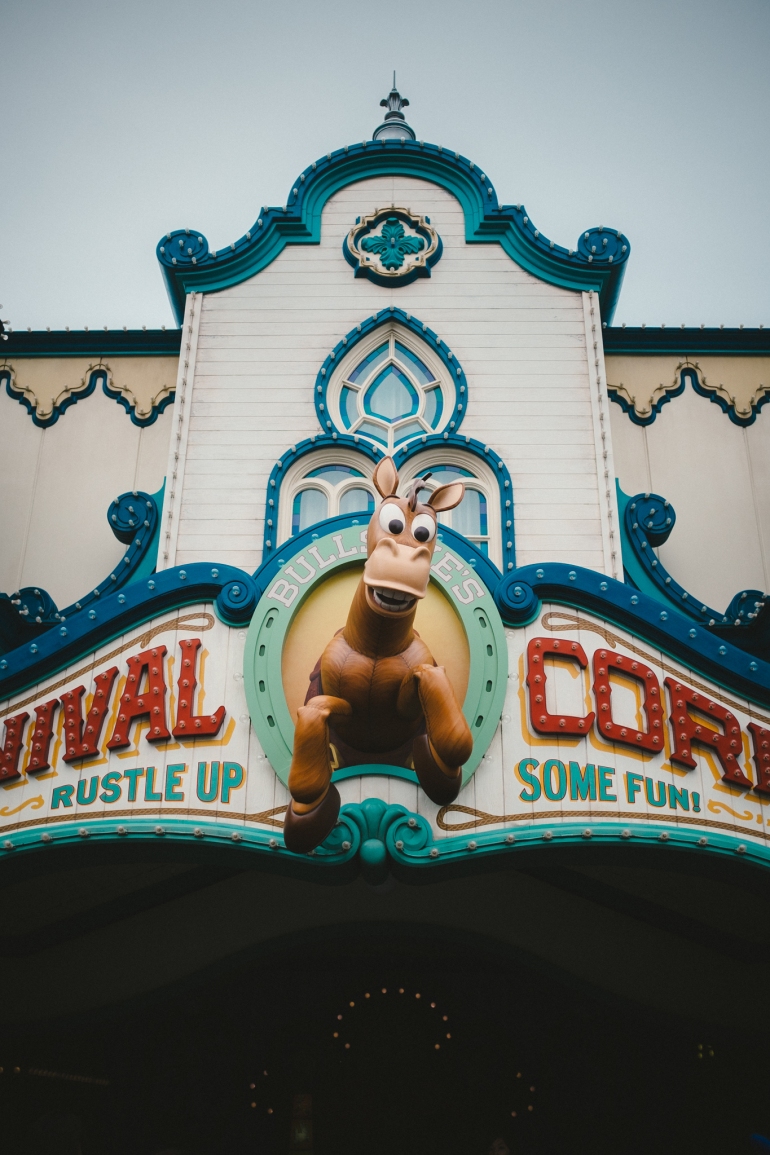 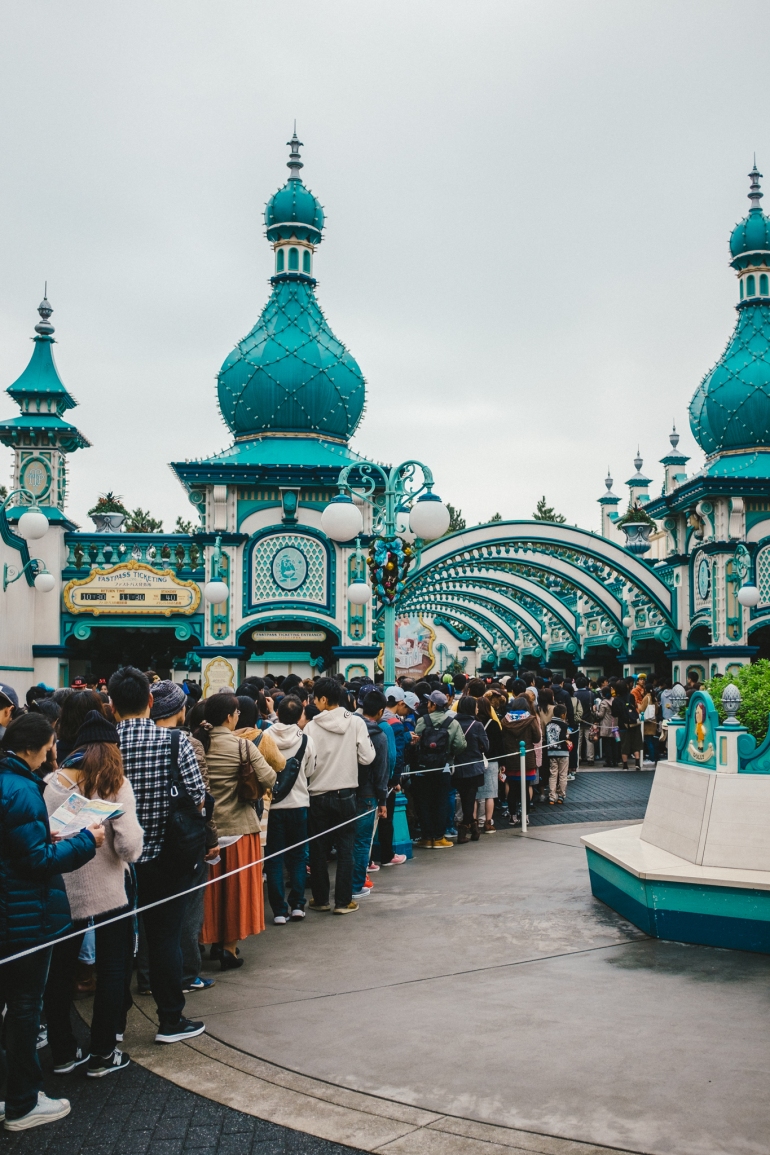 This is what the Fastpass line looked like by the time we got out off the ride. Total madness. And it went on and on, back to the entrance of the American Waterfront land. 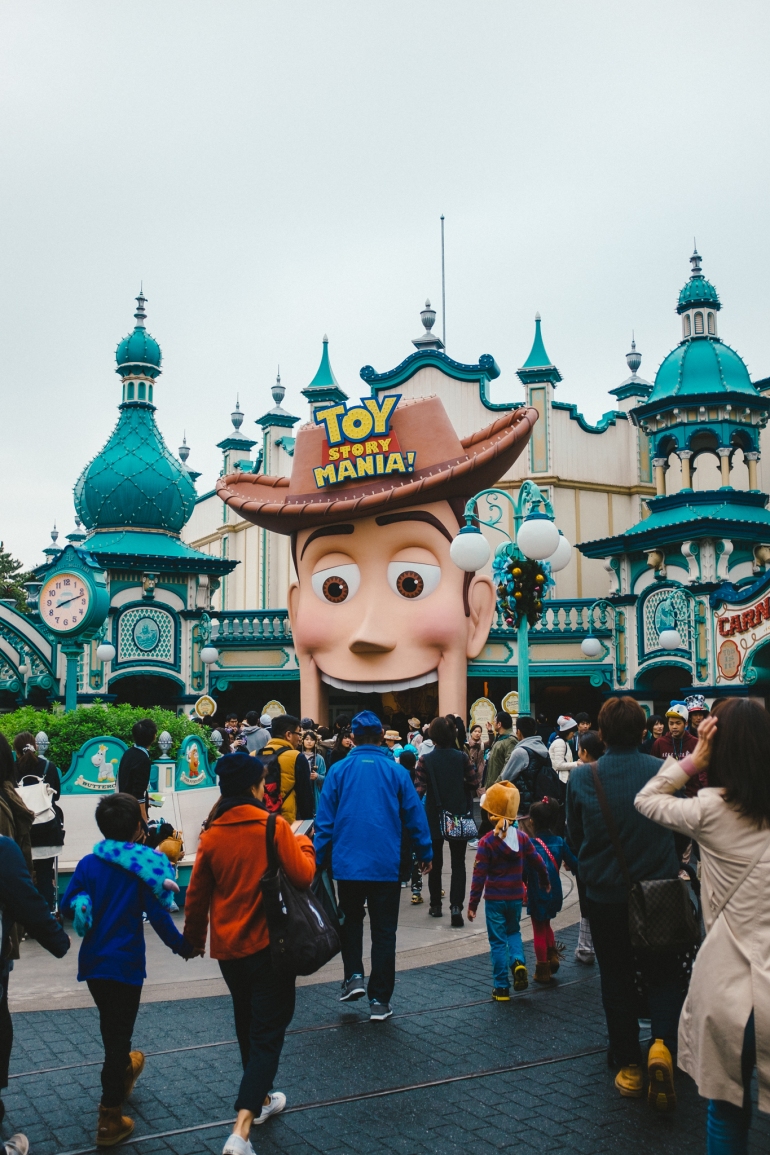 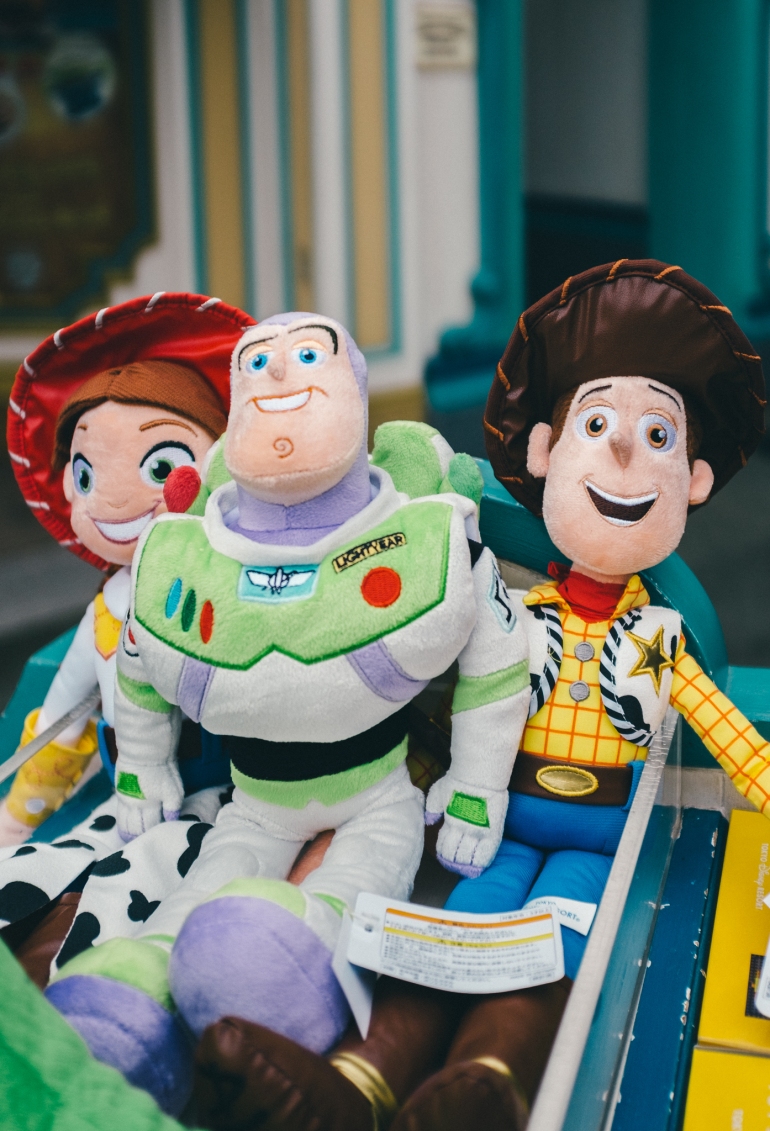 But I think the most surprising thing about it was just how polite everyone was. No yelling or shoving or pushing. Everyone just happily got in line, like it was no big deal. 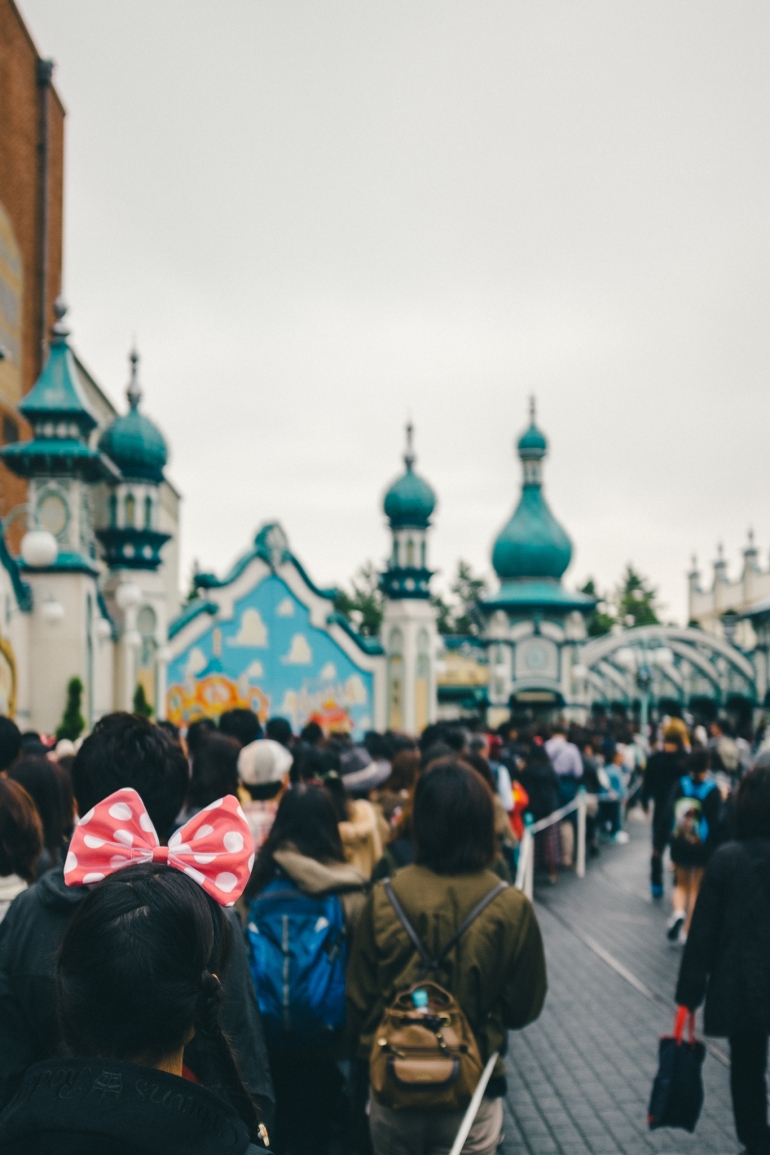 Also? With everyone in line for Toy Story Mania Fastpasses, the rest of the park is EMPTY — at least for an hour or so. Such a glorious thing. We hopped off the ride and immediately took advantage, riding Journey to the Center of the Earth in Mount Vesuvius, and Sinbad’s Storybook Voyage in the Arabian Coast. More on that soon!