Since we were only going to be at Disneyland Paris for two days, we thought it would make most sense to splurge on a VIP tour guide who could help us cut lines and see as much as possible.

Hashtag YOLO. Our tour guide (whose name now escapes me – the downside of writing this exactly two weeks after the fact) was pretty rad. I will henceforth call him Mr. LetsGoNowHurry. He asked us what we wanted to focus on and we told him, “RIDE ALL THE RIDES.” And damn, if he didn’t take it to heart.

We had 5 hours with him, so from 2pm-7pm it was a game of super-fast-walking to attractions, mixed with fellow-tourist-dodging and omg-I-am-exhausted feels. I think my iPhone said we walked almost 10 miles total? Crazyyyy.

First up was DLP’s version of the Haunted Mansion: appropriately titled, Phantom Manor. IT WAS SO BEAUTIFUL, I CAN’T EVEN. 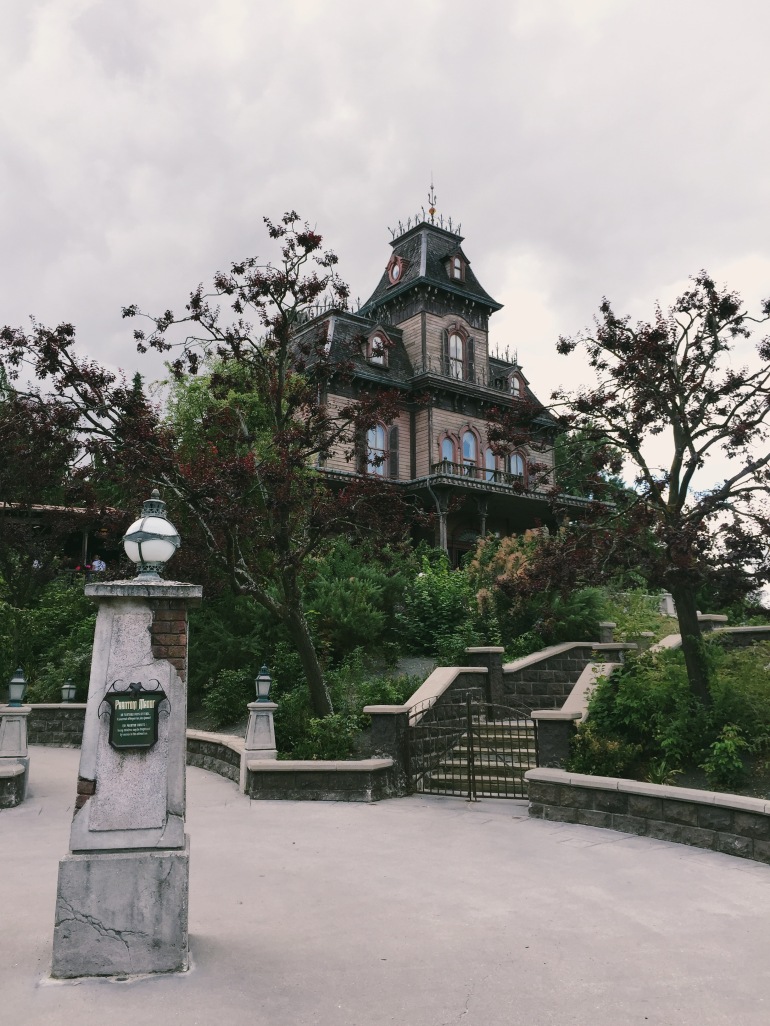 The obsessive compulsive Instagrammer in me wanted to take SO MANY PICTURES. But Mr. LetsGoNowHurry was on a mission. He took us around the back to the side entrance and effectively cut us through the 60hr queue. Can’t be mad at that.

Phantom Manor musings:
– Wow, it’s really dark in here.
– Is it supposed to be this dark in here?
– I’m actually kind of terrified.
– Like, there are SKELETONS over there that don’t look like they came from Party City.
– The ghosts are talking in French. Je ne parle pas Français.

Next up was Thunder Mountain.

Spoiler alert, but this ride ended up being my ABSOLUTE FAVORITE in the Disneyland Paris park. Our Thunder doesn’t hold a candle to this one. Not even one of those tiny tea candles you get in packs of 24! No, nope, no way. DLP Thunder >>> Disneyland Thunder.

Thunder Mountain thoughts:
– IT IS SO LOUD. (Seriously, people were plugging their ears cause the sound of the clicking on the tracks was INtense.)
– Where’s the goat?!
– Oh hey, there’s a photopass on this one. *CHEESE*
– This ride goes on forever. It has to be like, 4.5 minutes of pure bliss. BLISS, I tell you.
– And it ENDS WITH A DROP IN A PITCH BLACK TUNNEL. How’s that for “Wildest Ride in the Wilderness!?”
– Side note: how is it that the French do Thunder Mountain better than us!? We outta be ashamed, ya’ll.

After I professed my newfound love for Thunder Mountain, Mr. LetsGoNowHurry quickly shuffled us over to Adventureland. Indiana Jones time! 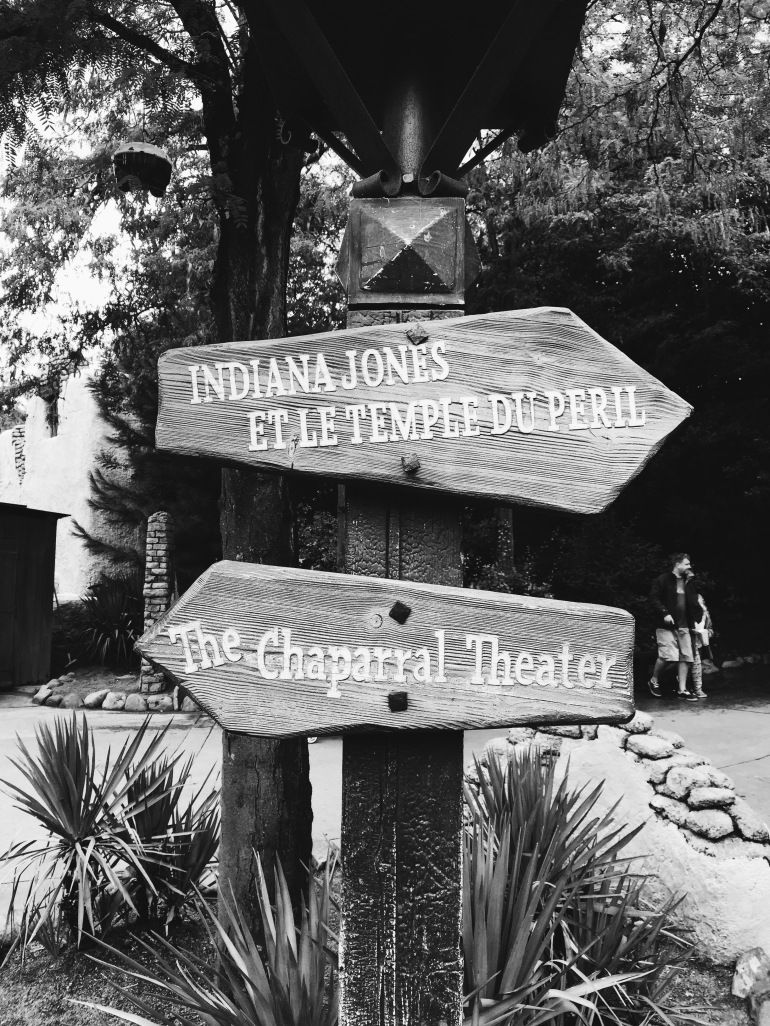 Ok, so this one was NOT my favorite. I think I even hated it a little. It felt a lot like Goofy’s Fly School (or, Mulholland Madness for you DCA veterans) only with an added loop-de-loop. 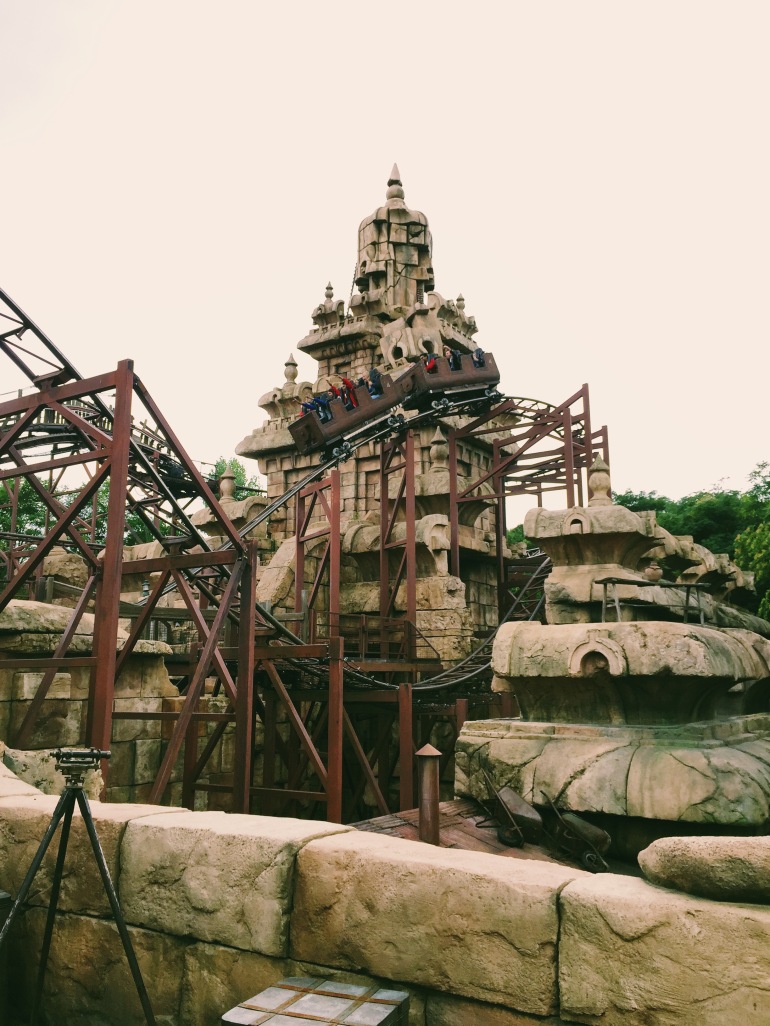 Next up on Mr. LetsGoNowHurry’s list was Pirates of the Caribbean. He was mad hustlin’ us at this point, so I don’t even have a picture of the exterior. Blasphemy!

But there was a photopass on the ride, so PROOF.

Pirates of the Caribbean contemplations:
– The “arrrrgh mateys” Pirate accent is even better in French.
– They have a restaurant inside the ride, just like Blue Bayou. Only they called it Blue Lagoon.
– Where’s the A/C? This is supposed to be one of those break-from-the-heat rides, but instead it’s hotter inside than out. Topsy-turvey world.

Time for the kiddie rides!

Peter Pan, then Pinocchio, then Casey Jr (Le Petit Train du Cirque). Not much to say about these, except the fact that Casey Jr. was a cute little “mini” roller coaster vs. a train ride in a cage. Plus it went around the Storybook boats, and was pretty and scenic. Win.

We didn’t end up riding the Teacups, but I made them stop so I could take pics and obsess about HOW PRETTY.

Here he is in the red vest ahead, our illustrious tour guide. Face forward, shoulders back. This is what he’d do while I stopped to take pictures. Always on the move! Always assuming that we were keeping up. (We usually weren’t.)

How was I supposed to keep up with all these sights competing for my brain power?!

Last on our list of lands was this one. No, not Tomorrowland – DISCOVERYLAND. Not sure why there’s that discrepancy? Do the French have no concept of tomorrow? Beats me.

First was Buzz Lightyear Astro Blasters (a clone of the one at Disneyland). I won.

Then… SPACE! Or, “Space Mountain Mission 2.” This is probably my favorite ride at Disneyland, so it had a lot to live up to…

And, the truth of it – not my favorite. The ride itself felt a lot like the Aerospace Roller Coaster at Hollywood Studios in Disney World. Very jerky and intense, and AGAIN with the loop-de-loop. Mom, remember that time you rode Space at Disneyland and got all woozy afterwards? Well, I think you might actually pass out if you rode this one.

Star Tours was fine; nothing particularly special. They have the original still, which was kind of nostalgic. And it was fun listening to C3P0 talk in French.

Then Autopia! Same gist as ours; rickety cars and intense gasoline smell.

Perfect opportunity for a #selfie, as you do.

After Autopia, Mr. LetsGoNowHurry reckoned Discoveryland was donzo. It was almost time for the parade!

But first: a quick tour of the supercalifragilistically magical castle and it’s dragon-filled underbelly. 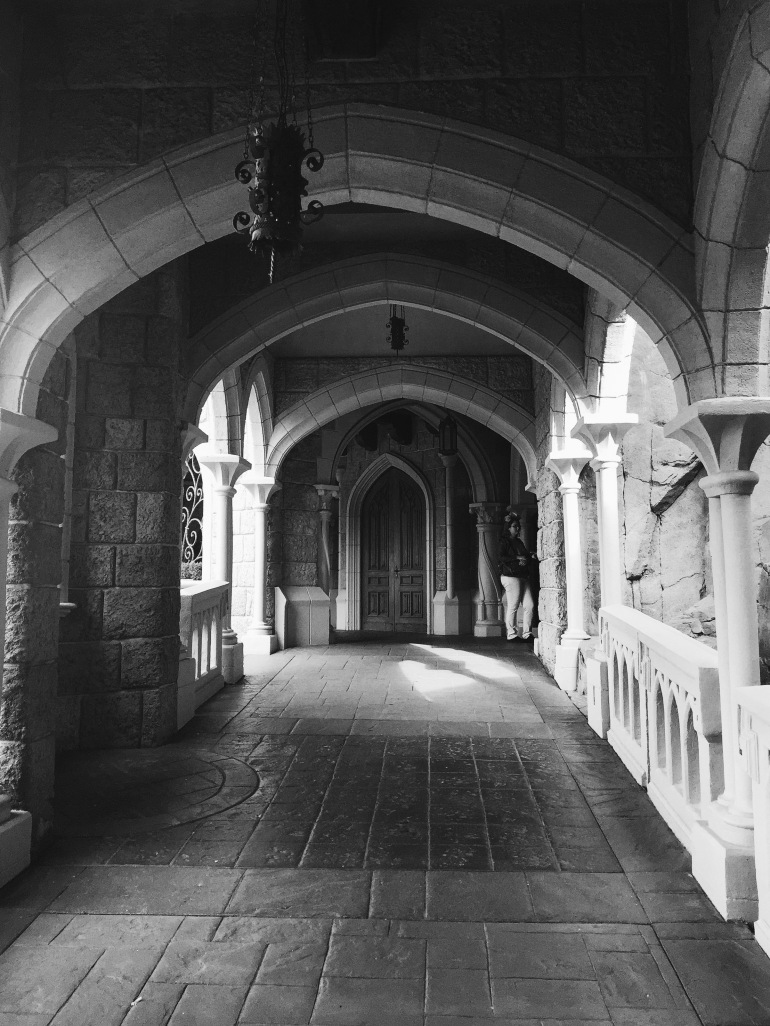 Game of Thrones vibes! I felt like the Khaleesi.

Up next: the parade, then Hollywood Studios park…