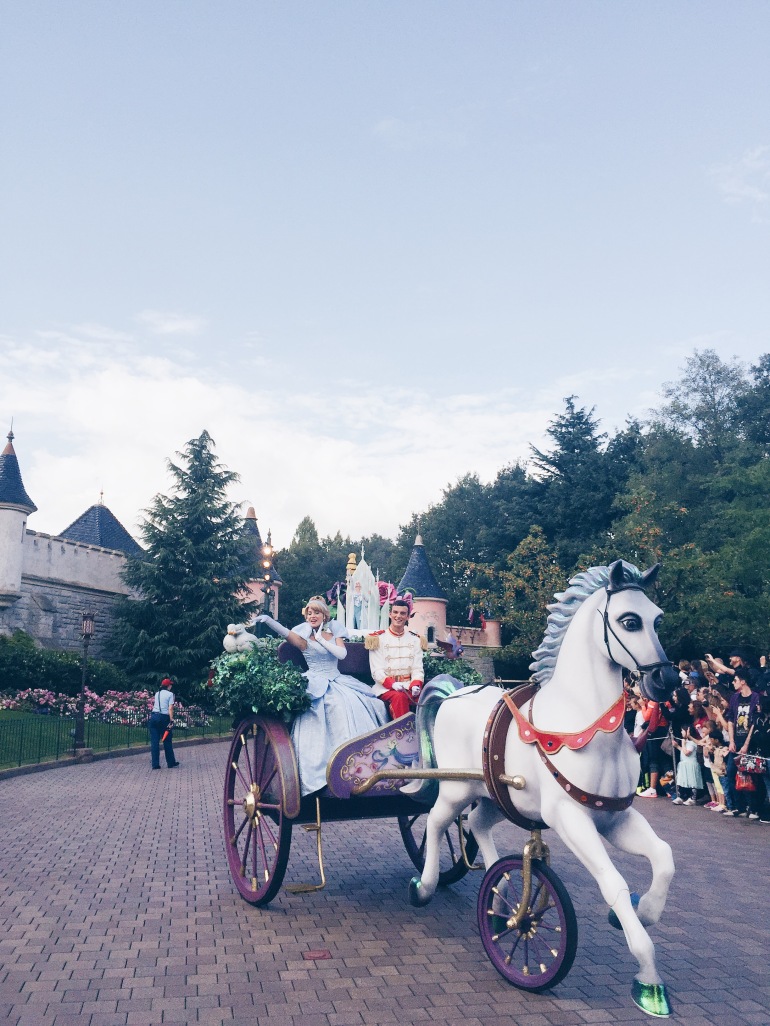 We left off just in time for the Disney Magic on Parade extravaganza. Our VIP tour guide, Mr. LetsGoNowHurry, got us an awesome spot in the reserved viewing area, where we could watch the whole thing sans crazy crowds. It was real cute. Full of dancing, singing (in English!), and some epic floats. 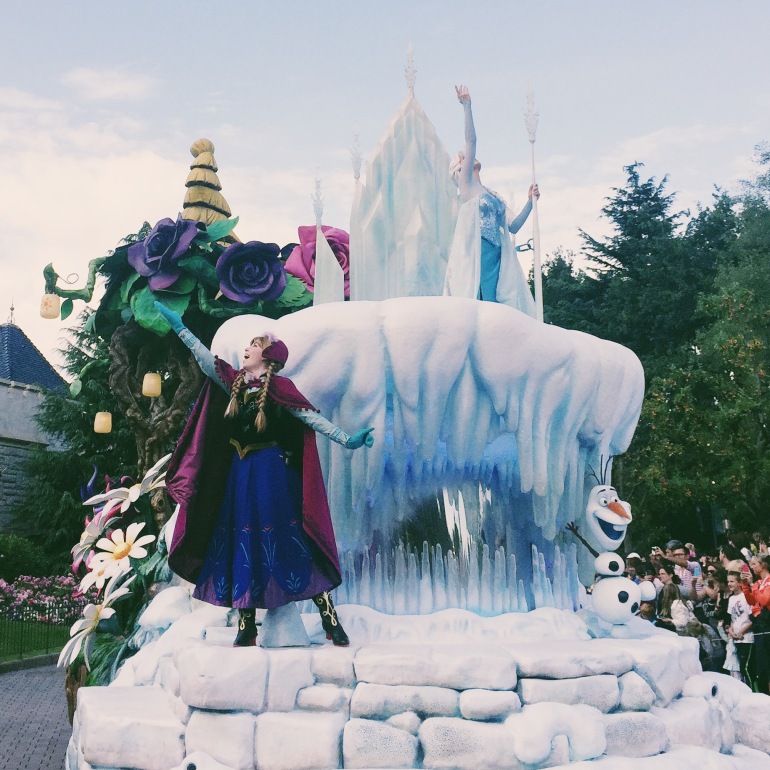 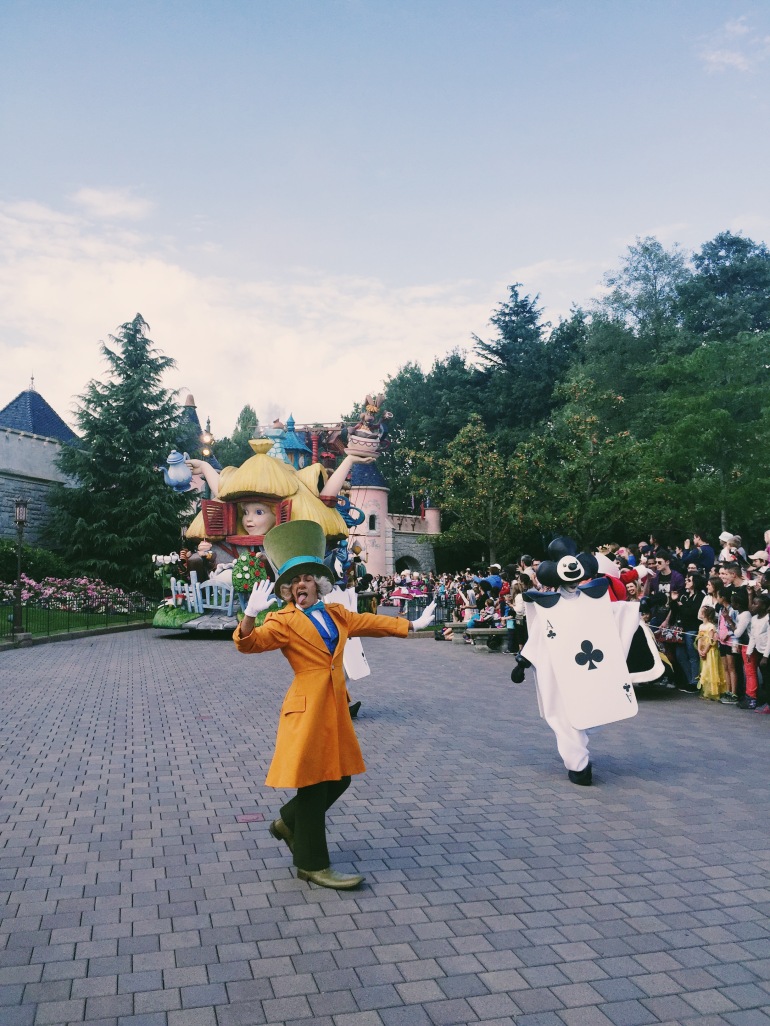 I want this costume! 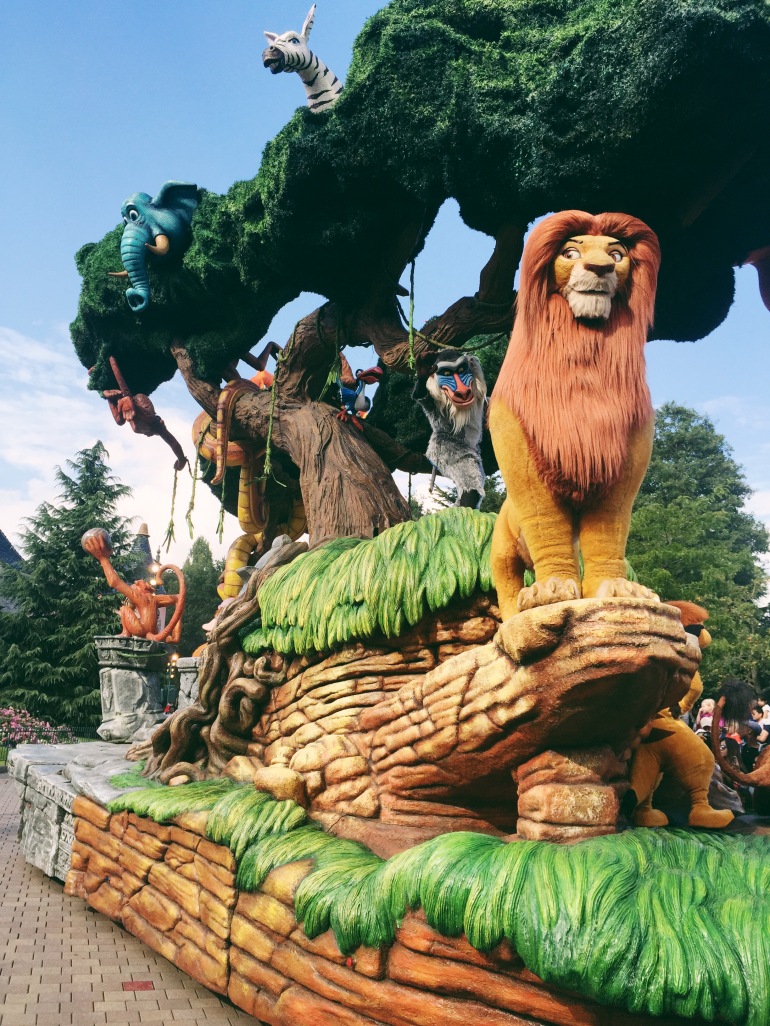 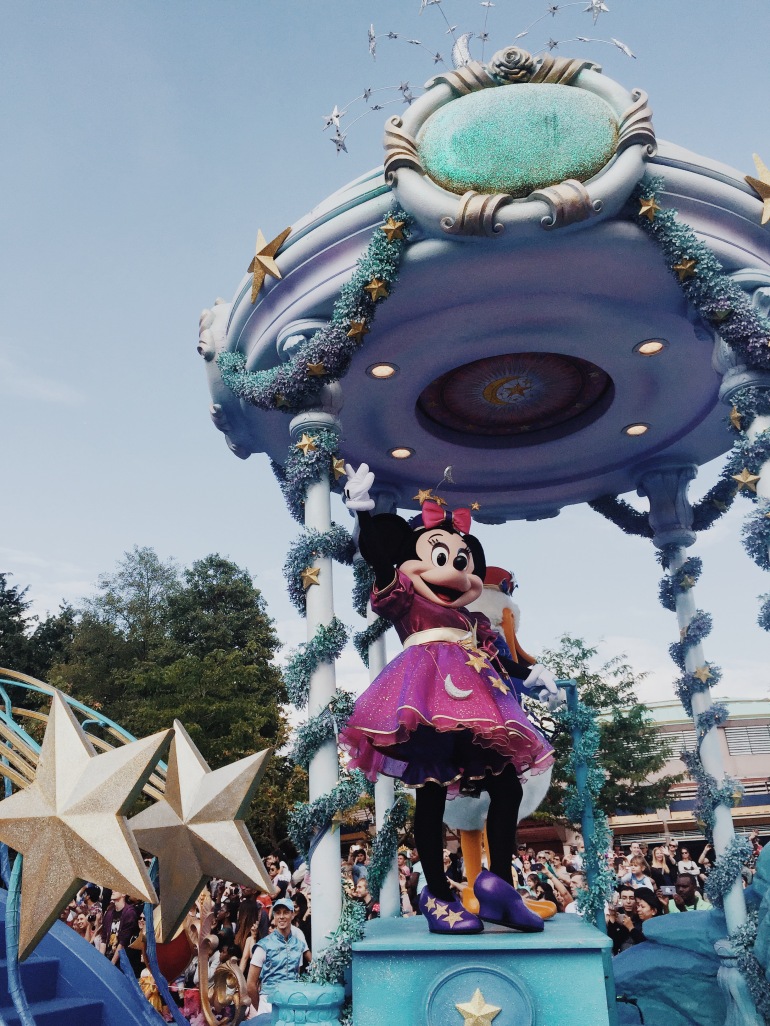 It ended with the best, naturally. Love you, Mickey!

The parade was extremely slow moving, and though it had finished up at our location, it still had the rest of Main Street to travel. Time for those handy back tunnels again!

Mr. LetsGoNowHurry took us down one, behind Main Street, bypassing the parade and leading us out of the park in less than 4 minutes. 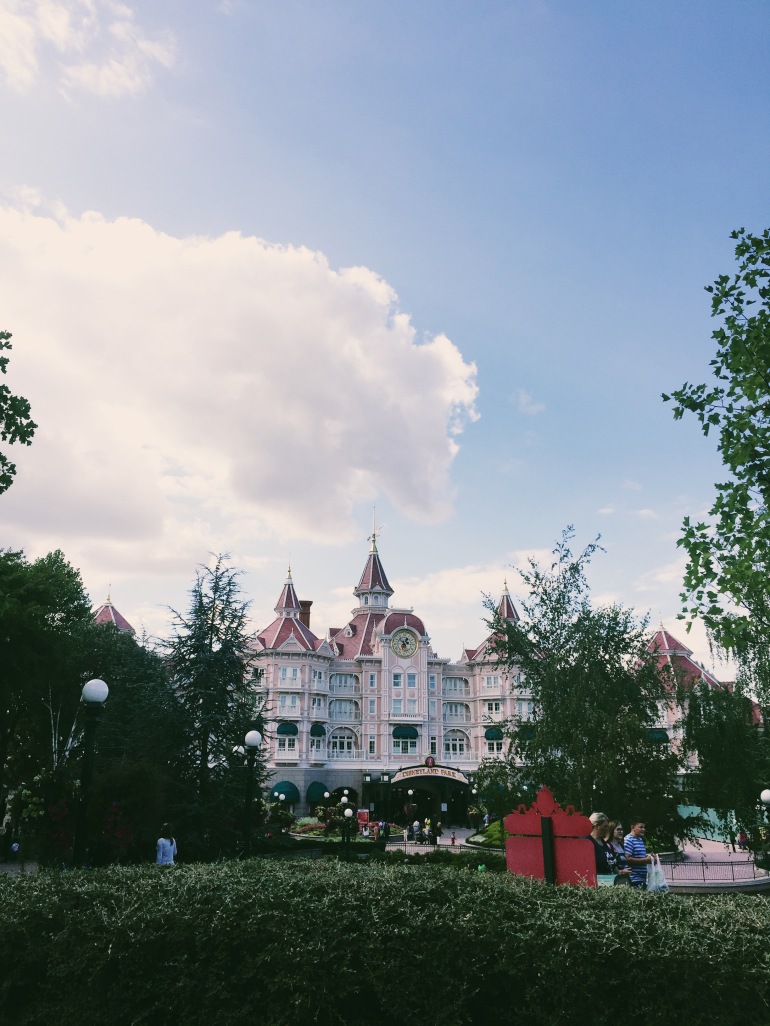 The park’s located just across the way from DLP, sort of the same distance between Disneyland and Disney California Adventure.

I think we only had about an hour left with our tour guide, and 5 or 6 more rides he wanted us to hit. Name of the game: LETSGONOWHURRY. 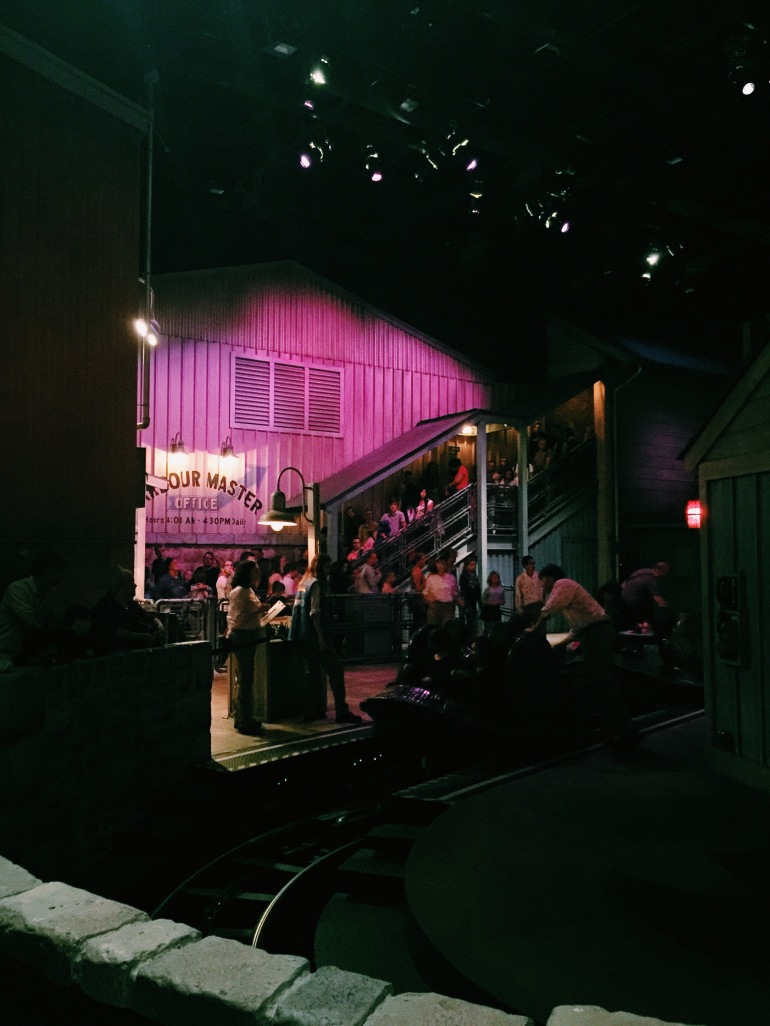 Crush n Gusher! I didn’t even get a pic of the exterior cause he took us around the back, but OMG. This is definitely my favorite of the new rides. It’s such a simple yet ingenious concept: you’re riding on one of Crush’s turtle shells, and while going up and down the roller coaster track, the shell itself is SPINNING. So much fun.

The extent of the Cars land… 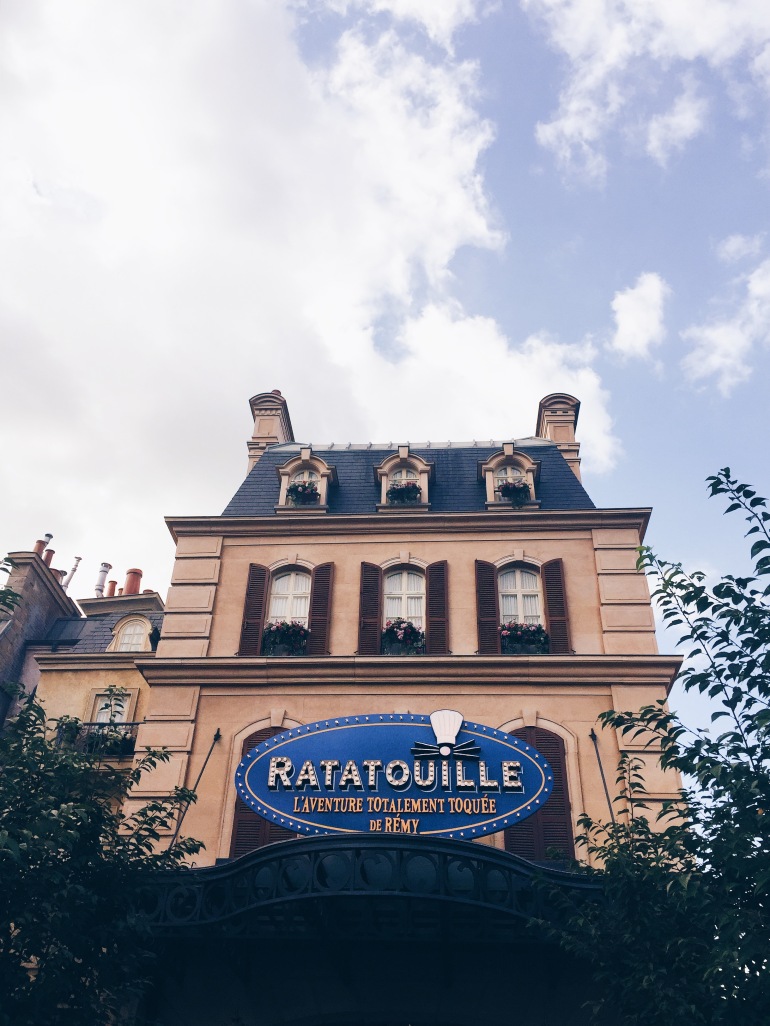 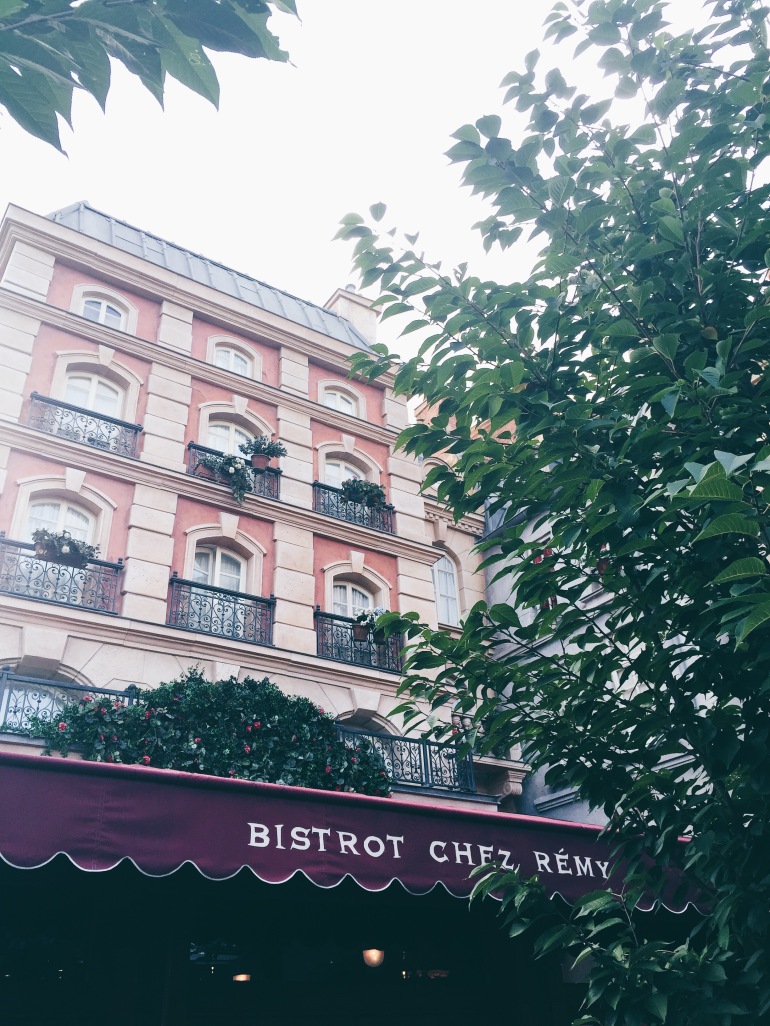 The next of the new-to-us rides was Ratatouille. LOVED it.

It’s hard to describe the concept. You’re seated in these massive magnetic boat things, which move around different rooms where there are 3D screens hidden behind pretty convincing props (massive table legs, etc). Then the (surprisingly immersive) video on the screens take you on an “adventure through the kitchen” where Remy and all his rat friends are trying to keep you from being caught by the humans.

The last of the new-to-us rides was this one. I don’t even know what it was called, but our tour guide called it the “Toy Story Car Ride.” Remember the first Toy Story movie where Buzz and Woody have to catch up to the moving van in that cute little battery controlled car? This is it!

The car was on a magnetized U shaped track, and each time in rolled back through the center it picked up more speed and went higher into the “U.” Surprisingly fun, for being as simple as it is.

Our second-to-last ride with our tour guide was the Rock ‘N Roller Coaster. We ran into a bit of a kerfluffle with one of the ride operators there, which felt very un-Disney-like if you get my gist.

Our tour guide had been taking us through the exit for most of these rides, as I guess the VIP people are supposed to do? Well, this one ride operator would NOT have it. She and our tour guide ended up having this heated discussion in French, which resulted in us having to back around to the front and cut through the closed Fastpass line. It felt like a macho Cast Member pissing contest that we somehow had the misfortune of witnessing, and sort of ended the evening on a slightly sour note.

Very last of rides on our list was Tower of Terror. Mr. LetsGoNowHurry had reached his time limit, so he got us through the Fastpass line and then had to say bye. I enjoyed our time with him, but was so so so glad the crazy whirlwind tour was over. I was EXHAUSTED.

We stood like zombies in the ToT queue, rode it (t’was exactly the same as ours), then walked in a stupor back to our hotel. 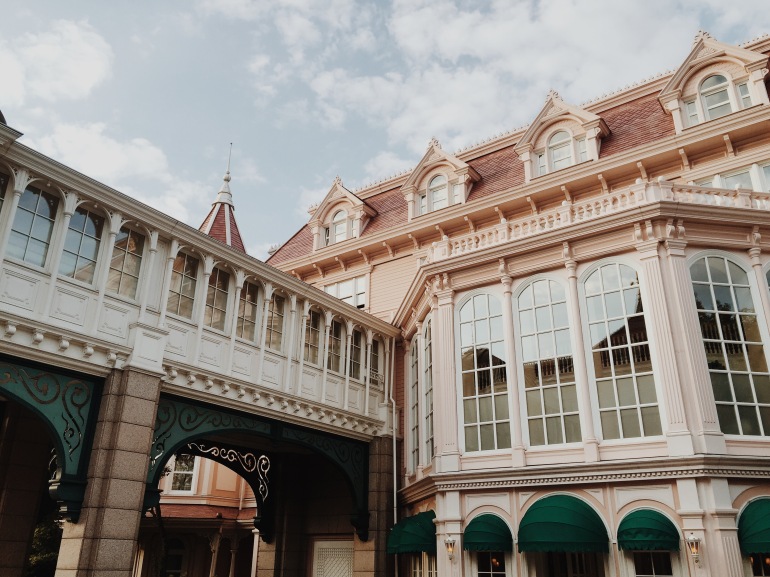 Overall thoughts on the VIP Tour:
– It was definitely worth the money, cause it allowed us to see almost EVERYTHING in 5 hours. Plus not waiting in lines is grand.
– Our tour guide was much less friendly than I would have expected from a “Plaid.” Perhaps just the cultural divide? He didn’t speak English very well, and only ever said anything if we specifically asked a question. Otherwise it was just a few words to tell us where we were going next.
– Even with the slightly standoffish LETSGONOWHURRYNOTIMETOSPARE tour guide, I really enjoyed the experience. Even if my legs felt like they might fall off afterwards. Which I swear they almost did.

Our delirium and our hunger led us to California Grill, inside the Disneyland Hotel.

Yeah, our first day in France and it’s all “American” food. Lunch at Walt’s, then dinner at California Grill. We got the irony.

It was a much fancier restaurant than we expected, and the only thing that sounded appetizing to our weird jetlagged stomachs was the chicken. (Who orders chicken at a restaurant!? I didn’t even bother taking a picture.)

The dessert we got was unreal. Chocolate fudge that was SO rich and SO velvety and SO good. I could’ve eaten 10. Maybe. If I wasn’t 2 seconds away from passing out at the table.